In last week’s blog, we considered a neurological/emotional process known as “hijacking.” This week we will look at four steps to defend yourself from this problem.

But first, let me illustrate the behavioral signs of hijacking with a short clip from the movie, Cinderella Man.

In this scene, Mae Braddock is struggling with a deep fear that her husband, James, is going to be killed in an upcoming boxing match with Max Baer, who has reportedly killed two men in the ring. Watch how Mae’s emotions overpower her in this scene (click here to view the clip).

Mae’s outburst at her children demonstrates the three classic signs of “amygdala hijacking”: (1) the sudden onset (2) of an intense emotional reaction (3) that is later regretted.

Part of this dynamic can be traced to tensions between different parts of the brain, which no longer function as seamlessly as God originally designed them.

Competition in the Brain

Last week we noted that because of the way the brain is wired, sensory impulses arrive at the limbic system, where emotions are centered, a few nanoseconds before they get to the neocortex, where rational thinking is located. This means that our emotions can get rolling before we are able to rationally process critical information.

Using functional neuroimaging, a team of neuroscientists led by Matthew Lieberman discovered another competing relationship between the amygdala (a central part of the limbic system) and the neocortex. 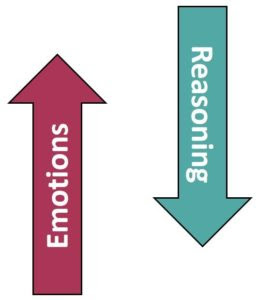 They found that when the amygdala is highly stimulated with intense emotions, it utilizes more blood and oxygen than normal, leaving less of both for the neocortex. This deficit causes a corresponding decrease in our capacity for reasoning, problem solving, and impulse control. This can lead to a temporary loss of 10 to 15 IQ points!

Yes, you really do get dumber when you’re highly emotional.

So when someone asks, “What were you thinking?” after an emotional outburst, part of your answer can be, “I was thinking with a lot less brain power than I normally have at my disposal.”

Realizing that emotional hijacking makes it difficult to think clearly, our ministry has developed a few simple acrostics to make it easier for you to manage your words and actions wisely in stressful situations.

One of these acrostics is set forth in this principle: “To become more self-aware and self-engaging, READ yourself accurately.” This acrostic summarizes four key steps that can help you resist hijacking:

Recognize – What am I feeling?

Neuroimaging, as well as practical experience, have shown that labeling emotions can help to reduce their intensity and shift more of their management back to the prefrontal cortex.

For example, in a study conducted by Dr. Lieberman, when people attached a word like “angry” to an angry-looking face, neuro-activity in the amygdala, which processes fear, panic and other strong emotions, decreased significantly. This dampening effect was accompanied by a corresponding increase of activity in the neocortex, which controls impulses.

Recognizing and labeling emotions also helps us to pull them out of the shadows and identify those that pose risks to our relationships. Just as pneumonia is a more dangerous illness than a common cold, bitterness is more dangerous than disappointment, self-pity can lead to more problems than sadness, and fear can be more crippling than concern.

So it is important to practice looking into our own hearts and accurately applying labels such as sad, discouraged, depressed, angry, lonely, embarrassed, rejected, bitter, jealous, and self-pity, to name a few.

Evaluate – Why am I feeling this emotion?

The next step is to ask yourself, “Why am I feeling this way?” Asking these kinds of questions helps to move your thought process from the amygdala to the neocortex.

When I’m attempting to override a hijacking, I actually visualize grabbing my thoughts with both hands and dragging them from the back of my brain to the front of my brain, where my prefrontal cortex (and reasoning capacity) is located.

That’s also where all my sermon applications, memorized Scriptures, and lessons learned the hard way are stored, which is exactly what I need to draw on in order to defeat emotional hijacking.

More importantly, asking yourself why you’re feeling certain emotions helps to identify the circumstances and desires that are driving them, which is a crucial step toward controlling them (see James 4:1-3; Matt. 15:18).

The process looks like this: “I’m feeling angry. Why? Because Corlette just questioned my judgment. Why does that bother me so much? Because I’m proud and want her unqualified trust, respect, and support. Why else? Because I’m busy and I’m lazy and don’t want to spend more time explaining myself to her.”

Or, “What am I feeling? Self-pity. Why? Because I work my tail off for my family and make all sorts of sacrifices for them. And here when I needed just a little bit of support from them, they say they’re too busy. It’s just not fair. Really? So why have you been serving them all along, to put them in your debt?” Ouch!

As we dig into the depths of our own hearts in the middle of intense emotional times, we will often find that God is using the situation to free us from the grip of sinful desires and passions that have become controlling “idols.” (For more guidance on overcoming desires and emotions that seek to rule your life, see Getting to the Heart of Conflict.)

Anticipate – What are the likely consequences if I give in to this emotion?

Here again we are making a conscious effort to move our brain activity from the emotional zone to the reasoning zone. We draw on memories, experience, and learning by asking, “What is likely to happen if I give in to these emotions?”

It looks like this: “If I give into my anger, I’ll become defensive and say harsh things to Corlette, which will make her feel guilty and disrespected, and reluctant to voice questions or concerns in the future, which would not only hurt her but also undermine our ability to work as a team.”

Or, “If I give into self-pity, I’ll withdraw from my family and give them the cold shoulder. I’d like to label that as a defense mechanism, but the hard truth is that it’s simply a way to punish and manipulate them for not treating me the way I want. That will only build walls and distrust between us.”

“But worst of all, these reactions will offend my loving God who sent his Son to free me from these very sins.”

You’ll find equally uncomfortable but course-changing mental conversations when the emotions in question are bitterness, envy, jealously, depression, or hopelessness.

Direct – How can I channel my emotions onto a constructive course?

Although emotional hijacking can be almost instantaneous, these defense mechanisms take time. So what do we do to gain this time?

Buy some time. As I mentioned last week, one of the simplest anti-hijacking techniques is to always have a bottle of water or cup of coffee in front of you in any meetings or conversations that could become emotionally volatile. Make a firm resolution that you will not respond to an irritating or offensive comment without first taking a sip of water or coffee. The six seconds it takes to do so will usually give your neocortex time to catch up with your amygdala.

Another way to buy some time is to simply ask for it. “You know, this is really important to both of us, so I’d like to take a few minutes to walk around the block and think about our options.” Or, more simply, “We’ve been talking quite a while, and I need to take a bathroom break.”

Oxygenate. Slow down the conversation and breathe deeply. In emotional situations your brain is working intensely and using up a lot of oxygen. Be deliberate in replacing it. Your mother probably never heard of neuroimaging, but somehow she knew that counting to ten was always a good thing.

Rejoice in the Lord … and remember that he is near. This is a discipline the apostle Paul urged the Philippians to practice when they were wresting with a conflict: “Rejoice in the Lord always; again I will say, rejoice. Let your reasonableness be known to everyone. The Lord is at hand” (Phil. 4:4-5). It’s difficult to have two strong emotional experiences simultaneously, so rejoicing in God—remembering his character, works, and promises—is an excellent way to counteract strong negative feelings about another person.

Pray. Paul goes on in Philippians to teach, “Do not be anxious about anything, but in everything by prayer and supplication with thanksgiving let your requests be made known to God” (Phil. 4:6). In addition to appropriating God’s grace, prayer moves your thoughts off of what is provoking you and centers them on God himself … which should put worldly issues in a clearer context.

Be thankful. Since it’s difficult to entertain competing emotional experiences at the same time, being thankful is another way to counter a hijack (see Phil. 4:6). While it’s especially effective to be thankful for the person you’re talking with, other kinds of thankfulness can be helpful … whether it’s thankfulness to God for his many kindnesses to you, or thankfulness for other people he’s placed in your life. As Paul told the Philippians:

Do a 180. If you realize that our emotions are trying to lead you in a direction that is contrary to the love and character of Christ, ask him for grace to “do a 180,” that is, to do exactly the opposite of what you feel like doing (Luke 6:27-36; Rom. 12:20-21; see this blog for more specific guidance).

Learn from your mistakes. If you are hijacked, get a benefit from it. After your emotions cool, spend some time reflecting on what happened and why. Identifying the trigger for that event can help you be better prepared when you face a similar situation in the future.

There are no panaceas. Since we live in a fallen world, we will always be faced with the challenge of mastering our imperfect minds and emotions. But if you practice the spiritual principles that are summarized in the READ principle, you can steadily improve your ability to head hijacking off at the pass, and channel the power of your emotions into constructive words and actions.

This truth is beautifully illustrated in another clip from Cinderella Man, after Mae has spent time doing the kinds of things described above (in real life, Mae Braddock was a devout Christian). Watch what happens when she uses all of her mental and emotional gifts to bless her husband before he heads into the ring (click here  to view the clip).

What an excellent illustration of the simple but life-changing relational wisdom summarized in Philippians 4:4-7:

Rejoice in the Lord always; again I will say, rejoice. Let your reasonableness be known to everyone. The Lord is at hand; do not be anxious about anything, but in everything by prayer and supplication with thanksgiving let your requests be made known to God. And the peace of God, which surpasses all understanding, will guard your hearts and your minds in Christ Jesus.